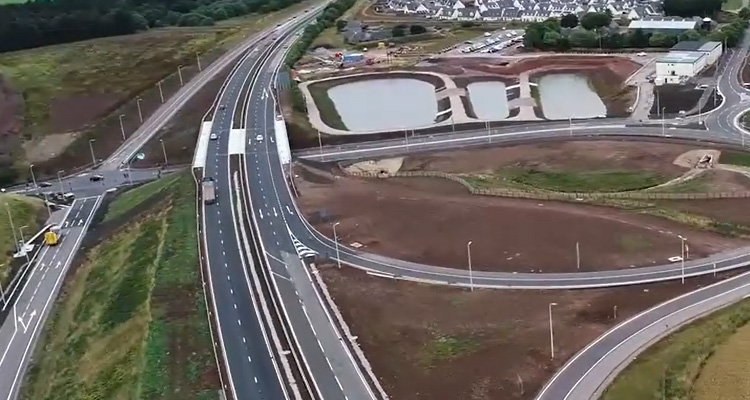 Road users are being encouraged to drive with extreme caution on all north east roads while they become accustomed to the new A90, the AWPR, and new road layouts.

The new road, which includes the new A90 section between Stonehaven and Craibstone and the new A956 section between Cleanhill and Charleston, will provide north east road users with access to around 20 miles (32km) of new road.

A phased approach will be used by Police Scotland to open the junctions. Initially, Craibstone, Stonehaven and Charleston will open to traffic, with Deeside, Kingswells South and Kingswells North (A90 southbound exit slip road only) following shortly thereafter. Cleanhill Junction, which links the new A90 with the new section of the A956 will also open as part of this process.

“We understand that the people of the north east are keen to use the AWPR as soon as possible but we have to remind people that this is a major piece of infrastructure which is opening to traffic. This means that significant changes will be implemented overnight on other trunk roads, such as the A96, and local roads across the north east network to accommodate new Junctions and new speed restrictions.

“It is therefore imperative that you not only drive with more caution for your own safety but also consider other road users’ safety as well. There will be a degree of uncertainty amongst some drivers and you should be prepared to react appropriately to ensure you can complete your journey safely.

“We also kindly request that road users observe all signage and modify their driving accordingly to suit the conditions of the road, such as low sun or rain.”

Police Scotland Chief Inspector Stewart Mackie, who is responsible for road policing in the North said:

“This new road is a great asset for the north east and will make the journey from the north to south of the city considerably quicker. From a police response perspective, it will allow us to respond more effectively.

“The bypass is designed to the highest safety standards and as such we would hope that we see a reduction in casualties and collisions in and around Aberdeen as a result.

“This is a brand new road and it will take people time to familiarise themselves with the road and the new junction layouts. When you first use the road please leave plenty of time for your journey.

“We're committed to making sure people use the road safely so our officers along with staff from the Safety Camera Unit will be conducting high visibility patrols and speed checks along the entire length of the route.”

“The AWPR is a long awaited and highly welcomed inclusion to the North East roads network. The North Safety Camera Unit will assist our police colleagues in establishing the road as a safe, enjoyable route, by carrying out a period of short term deployments in order to further remind motorists of the speed limits and encouraging them to travel within them, particularly at a time when drivers are trying to familiarise themselves with the new layout and junction movements.

“Whilst the maximum speed limit on the route for cars is 70mph, 60mph for smaller goods vehicles, such as Ford Transit and Ford Connect types, and 50mph for Heavy Goods Vehicles, drivers should be aware that vehicles may be travelling much slower than these maximum limits as they try and interpret the junction layout ahead. Further information on individual vehicle type speed limits can be found on our website - www.safetycameras.gov.scot.”

These two new sections follow road openings between Balmedie and Tipperty, in August 2018, Parkhill and Blackdog, in June 2018, and the Craibstone Roundabout and Dyce Drive section, in September 2016.