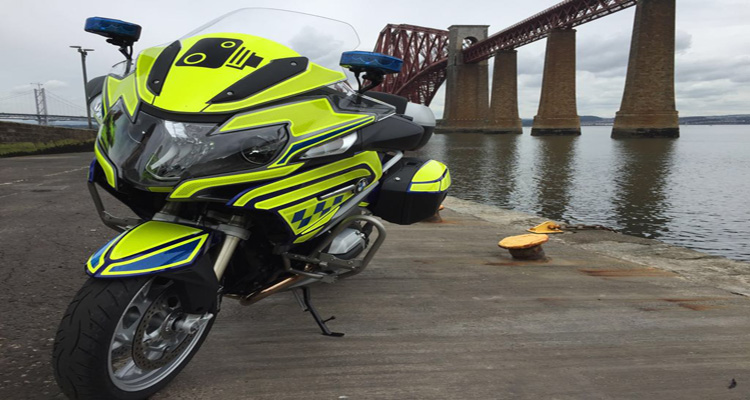 A new safety camera motorcycle which can be used across the country is being launched by The Scottish Safety Camera Programme. The motorcycle will supplement and enhance the mobile fleets as its compact nature will allow it to attend at locations previously unavailable to the current fleet of camera vans.

Death and injury on our roads has a devastating impact on victims, their families, communities and the wider economy. Police Scotland remains committed to reducing road casualties in collaboration with our partners and meeting the Scottish Government’s 2020 road casualty reduction targets.

The motorcycle, weather permitting, will operate year round. While it will not concentrate on any particular type of vehicle, it will be operating on routes where, from late spring to early autumn, there have been a disproportionate number of motorcycle casualties. Supporting data shows that while motorcycles account for only 1% of all traffic on the road, they account for 13% of fatalities.

It is hoped that the motorcycle will resonate positively with the biking community, highlight that they are travelling on some of our most dangerous routes and influence riding behaviour accordingly.

It should be stressed that we are not out to stop anyone enjoying our stunning Scottish roads, we are there as a very visible deterrent to encourage all drivers and riders to make responsible use of the roads.

“Safety Cameras have been operated in Scotland for over 20 years now and with the support of the Scottish Safety Camera Programme office we have continued to implement new technologies in our ongoing efforts to reduce the number of injuries and deaths on our roads   and encourage speed limit compliance.

The motorcycle will be used nationally and our initial aim is to incorporate it into existing route strategies. In the east, these include the A68, A7 and the A84/85/82 corridor from Stirling to Tyndrum.

In particular, the Stirling to Tyndrum route, often referred to as The Road to the Isles, is a busy summer route popular with tourists, local traffic, commercial vehicles and motorcyclists. In the past, this route has had a disproportionately high injury collision rate – often involving motorcycles.

“The introduction of the safety camera motorcycle provides us with a very flexible and compact resource which can be used on stretches of our roads   where safety camera vans or uniformed officers could not previously be deployed.

This is a highly visible resource and while enforcement is part of our agenda, our primary role and that of the camera motorcycle is to influence driver and road user behaviour. The routes being patrolled have a high injury collision rate and a disproportionately high motorcycle rider casualty rate, though I must stress that our motorcycle is not out there to specifically target motorcyclists, it’s there to monitor the speed of all vehicles.

Hopefully its presence will resonate with riders and drivers alike and have them adjust their riding or driving accordingly. Speeding is a consistent concern for our local communities and our efforts will enhance the already effective deployment of Police and Safety Camera Unit assets.