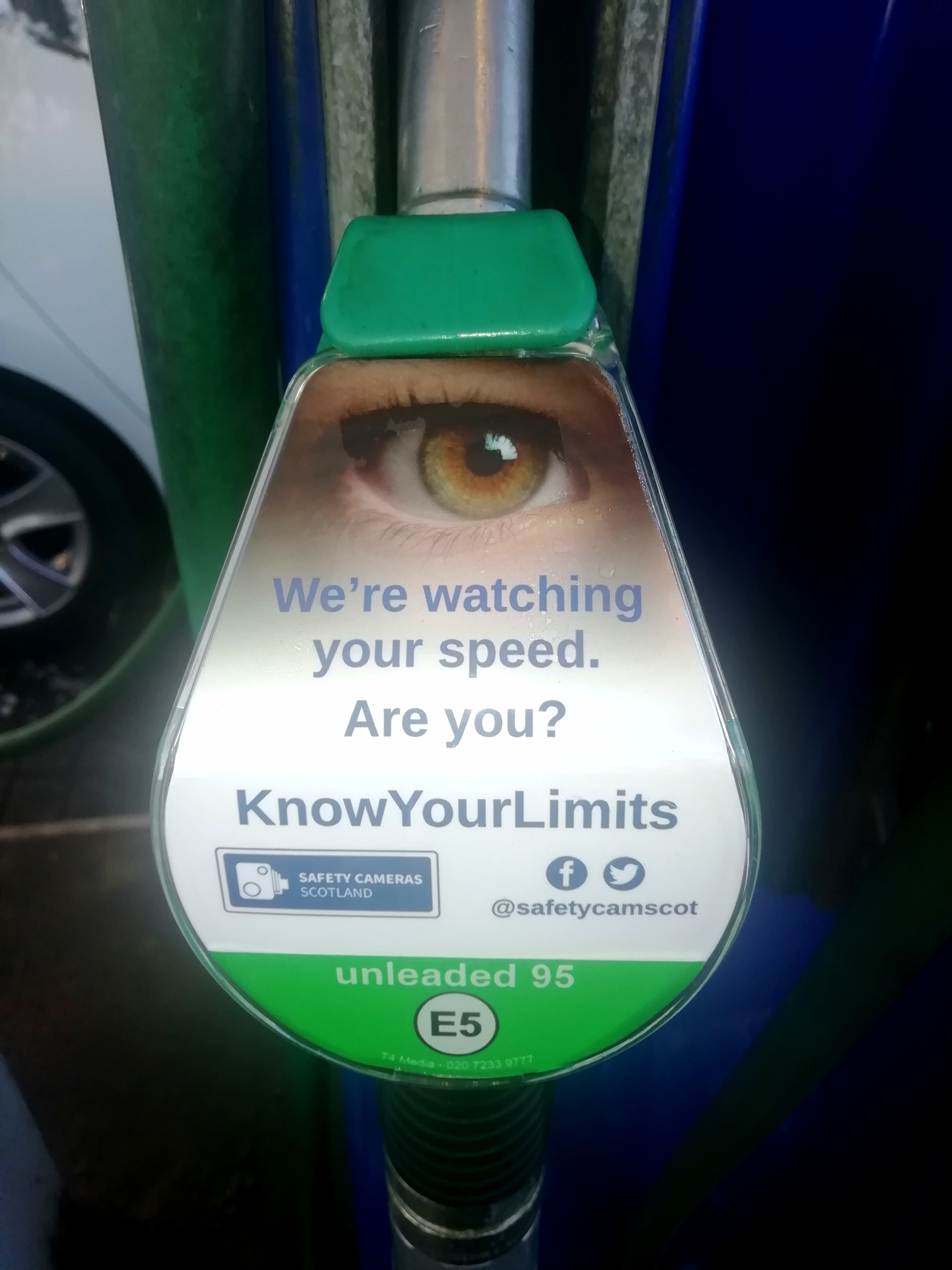 Safety Cameras Scotland are trying to raise awareness of enforcement in the west end of the city through advertising in Great Western Retail Park petrol station and on bus backs throughout the West of Scotland.

Great Western Road connects Glasgow City Centre and the west end of the city. Despite the high levels of traffic there are issues with speed at this location which has resulted in a high number of collisions. Safety Cameras Scotland began enforcing on Great Western Road in 1998. We now have 4 sites along the route at Cleveden Road, Keal Avenue, Knighstcliffe Avenue and Duntreath Avenue. We aim to improve driver behaviour on this road through a variety of fixed, dual & mobile enforcement. A new fixed camera site was announced at the end of 2020 at Gartnavel hospital.

Officers from Road Policing Glasgow recently carried out enforcement in the area with reports of driver’s detected doing speeds of 70mph in the 30mph zone. Greater enforcement activity, both by Safety Cameras Scotland and Police Scotland, has had a proven impact on improving driver behaviour on this stretch of road however this must be developed further. We need more people to associate travelling at excessive speed and other dangerous driving with criminality.

Work has been undertaken in the area to increase active travel on this stretch of road. In July 2020 Glasgow City council began work on temporary cycle lanes between Drumchapel and Knightswood as part of their Spaces for People programme, which is providing additional space for physical distancing to protect public health and suppress a resurgence of COVID-19.This new route has increased the practicality and attractiveness of active travel for both leisure and commuting in the area and hopefully reduce the volume of cars. As a result of the Spaces for People programme, and more people out walking, there has been an increase in the number of vulnerable road users along this stretch of road. This means that it is vital that all road users be aware of the speed limits in place and abide by them to make the roads safer for everyone.

Denise Hamilton, Head of Communications for Cycling Scotland stated; ‘Serious cycling casualties have been increasing in Scotland over the last fifteen years, in line with the increase in cycling. The reality is the chance of being seriously injured or killed cycling on Scottish roads is low – but one serious injury or death is one too many and fear of traffic is stopping more people cycling. Evidence shows the risk of serious injury or death for people cycling and walking increases disproportionately as speed increases. Reducing speed limits and tackling speeding make our roads safer for everyone and it’s really positive to see greater police enforcement in Glasgow, with four camera units on Great Western Road and soon to be another at Gartnavel Hospital.’

Alan Bowater, Manager for the West Safety Camera Unit added; ‘Our main aim is to reduce the number of people killed or seriously injured by encouraging improved driver behaviour and speed limit compliance on the roads. We are aware of the issues along the Great Western Road, there are currently four enforcement locations with a fifth location approved during the last site selection process which will become operational in the near future. Each new permanent enforcement location must pass criteria and where a new location is identified all types of enforcement are considered before the most appropriate is put in place, for the Great Western Road this has been a mix of mobile and fixed camera enforcement. To act as a reminder of the speed limit and to educate local motorists we have invested in an advertising campaign on bus backs along the Great Western Road and petrol pump advertising at Great Western Retail Park.’