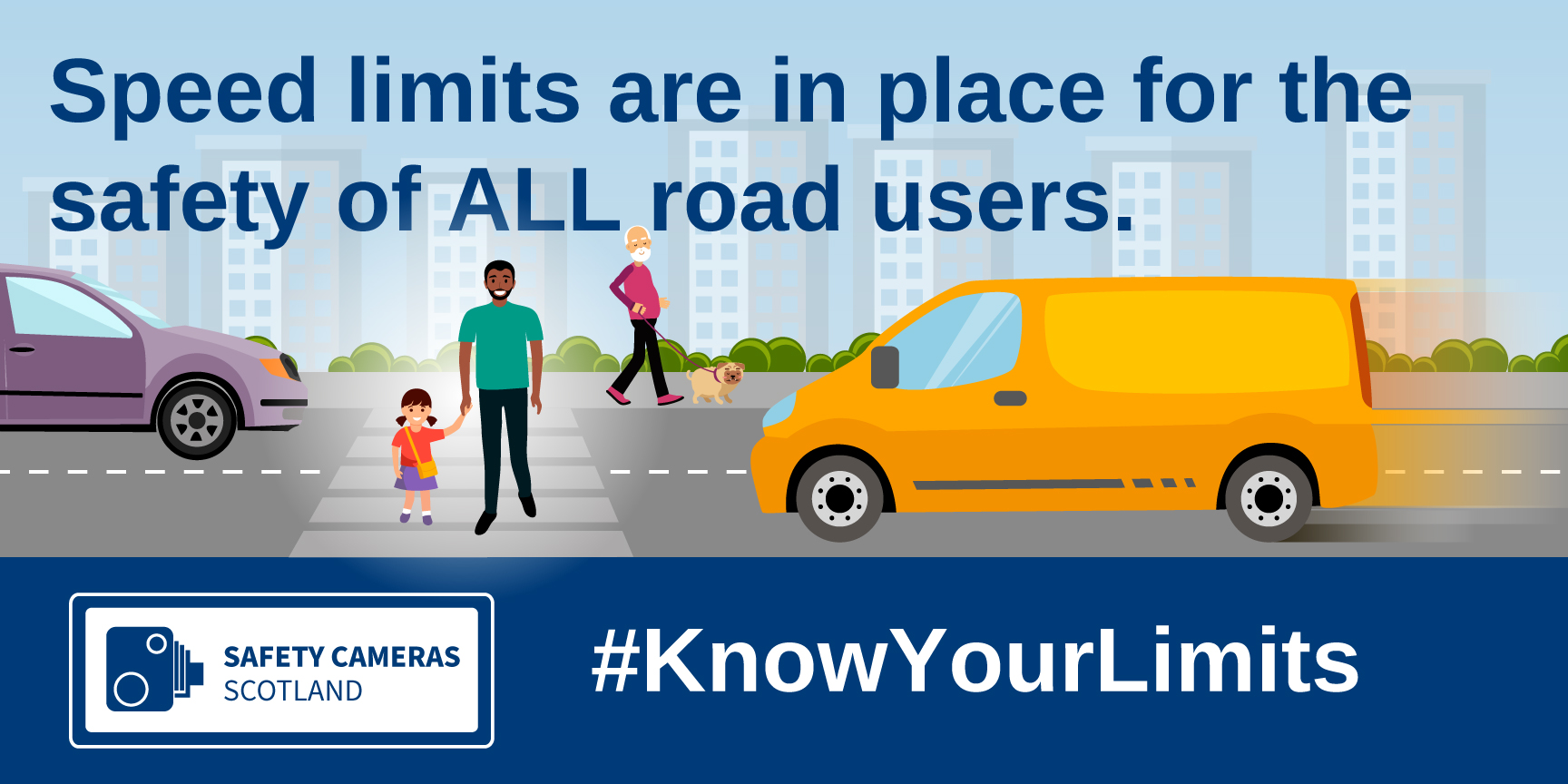 Safety Cameras Scotland aims to reduce the number of people injured on our roads through targeted camera enforcement and improving driver behaviour.  In order to influence driver behaviour we are highlighting the dangers of travelling above the speed limit by reminding them that “Speed limits are in place for the safety of ALL road users”.

The Highway Code already establishes a hierarchy of road users which ensures that those road users who can do the greatest harm have the greatest responsibility to reduce the danger or threat they may pose to other road users. Those most at risk in the event of a collision are termed vulnerable road users. These are the people with no protective shield to absorb energy from the impact such as pedestrians, cyclists, horse riders and motorcyclists.

Driving at safe speeds is shown to reduce the risk of road death and injury and enable more people to make safe and healthy journeys when walking, wheeling and cycling. Not only does it give drivers enough time to spot and react to hazards on the road, but if an impact was to occur it would be less likely to cause serious injury or a fatality.

With the summer weather conditions and more hours of daylight, there is likely to be an increase in traffic, more vulnerable road users and motorists may feel that it is acceptable to travel above the speed limit. Safety Cameras Scotland is reminding drivers that by staying within the speed limits they are keeping the roads safe for all.

Alan Bowater, Area Safety Camera Manager for the West; ‘The hierarchy of road users places those who are most vulnerable above motorised vehicles as they are more likely to be seriously injured or killed in the event of a collision. This places a great responsibility on those who can do the greatest harm to reduce the danger they pose to other road users. We want to highlight that by simply reducing your speed and travelling within the speed limits we can make the roads safer for everyone. ‘

A Cycling Scotland spokesperson said: ‘Cycling Scotland and partner organisations have been clear for many years that the top priority for enabling more people to cycle safely is to create more dedicated cycling networks, separate from vehicle traffic and pedestrians. Many other steps are needed in parallel to create safer roads for all, including tackling speeding and other dangerous driving behaviour. Evidence shows the risk of serious injury or death for people cycling and walking increases disproportionately as speed increases and that speed camera enforcement make roads safer for all.’